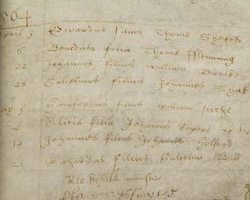 The parish register of Stratford-upon-Avon contains entries for William Shakespeare and his family, including his mother, father, wife, and children.

England in the reigns of Elizabeth I, James I, and Charles I experienced an era in theatre unlike any in history. During a span less of than a century, London saw the virtually overnight rise of a popular entertainment form that flourished until a Puritan closure of all theatres in 1642. When one considers the low overall literacy rate, a lack of standardized spelling, and the somewhat transient existence of many English playwrights of this time, it's miraculous that we have as much primary source material as we do today.

Fortunately for historians, English society was governed by a highly structured series of authorities and courts, with laws—and the accompanying paperwork—emanating all the way down from the monarch through Parliament to regional authorities down to local councils and church records. Today's Great Britain is a treasure trove of archival records from Shakespeare's time. Despite the occasionally frustrating gaps in sources, we actually have a great deal of contemporary documentation about sixteenth- and seventeenth-century English life.

Much of this documentation has been made available online in recent years. This makes it easier than ever for scholars and students to access original materials and primary source information. Below are some of best sites available.

Biographical Index of English Drama Before 1660
An annotated list of all playwrights, actors, patrons, musicians, and others known to be active in the production and reception of English plays until 1660.

The Early Modern Drama Database
These tables organize the most accurate available data on the performance of Early Modern English drama in London from 1576, when the first public playhouse was constructed, until 1642, when the playhouses were closed by Parliament.

Henslowe-Alleyn Digitisation Project
The Archive of Dulwich College in London, England, holds thousands of pages of manuscripts left to the College by its founder, the eminent actor Edward Alleyn, which includes his personal and professional papers and those of his father-in-law, Philip Henslowe.

The National Archives (UK)
Discovery holds more than 32 million descriptions of records held by The National Archives and more than 2,500 archives across the country. Over 9 million records are available for download. Note: there are registration requirements for access, and other restrictions may apply. You can learn more by visiting their free access page.

Records of Early English Drama (REED)
An international research collaboration that is establishing for the first time the context from which the drama of Shakespeare and his contemporaries grew. This growing database allows users to search through the surviving records of English drama, secular music, and other popular entertainment from the Middle Ages until 1642.

Stationer's Register Online
This searchable database contains the entries for the literary, musical and artistic works made in the Registers of the Stationers' Company of London between 1557 and 1640.